The Plenipotentiary Representative of the President of RF in Central Federal District Mr.Alexander Beglov has visited industrial enterprises of Livny 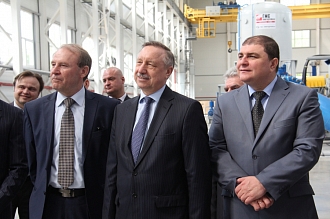 Mr.Alexander Beglov came to Orel region in company with the deputy of State Duma of Russian Federation Mr. Nikolai Kovalev. They were accompanied by the Governor of the Orel region Mr.Vadim Potomsky and by members of the Regional government.

Monitoring of compliance with May decrees of Vladimir Putin became the main purpose of the working visit of plenipotentiary representative of the RF President in Central Federal District области.

The JSC Livnynasos which is one of the biggest Russian Manufacturers of submersible centrifugal electric pumps used in municipal, industrial, agricultural and domestic water supply became the first point of visit of the plenipotentiary representative of the RF President. The enterprise holds considerable potential production, purposefully follows a policy of technical re-equipment, improvement of quality and upgrade.

Alexander Beglov has examined the exhibition of product samples, spare parts for pumping equipment which are fabricated by way of 3D-printer.

One more enterprise visited in Livny by Mr. Alexander Beglov was the JSC HMS Livgidromash. The modeling area of work, test station, tool room and foundry were shown to the guests. The enterprise fabricate pumps and pumping equipment for oil-extracting industry and petrochemical branches of economy, as well as for ship-building industry, power engineering and energetic companies, municipal enterprises, industrial agriculture, food and chemical manufactures. The enterprise makes more than 300 standard sizes of the pumps. Products are successfully going for export.

Working conditions, the level of salaries, social security matters of the factory workers were discussed by Mr. Alexander Beglov during conversation with the enterprise team and the top management of the JSC HMS Livgidromash.

Later on the meetings with the leaders of industrial enterprises of Orel region and Livny town were also held on. The main theme of the discussions was the import substitution, competitiveness, improvement of investment opportunities within Orel region.

On termination of the visit Alexander Beglov has shared his impressions about this visit. He highly appreciated the business activity of the enterprises of Livny town , pay attention to corporate social responsibility. One more positive moment which was noted by Mr. Alexander Beglov was the completion of the Program on provision of housing for veterans of war and disabled war veterans of the great Patriotic War.

At the same time the plenipotentiary representative of the President paid attention to burning questions which are subject to be solved in Orel region, particularly, the second shift at the schools.

«In spite of economic difficulties which are still in Livny town and in Orel region, the May decrees of the President of the country concerning the improvement of the quality of life of our people are executed on timely basis», as it was noted by Mr. Beglov.

«Visits of the plenipotentiary representative of the RF President in the Central Federal District deliver benefits and considerable advantage to the region , − Vladimir Potomsky has noted. – Some questions cannot be solved today without federal authority support».