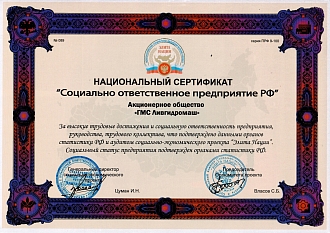 As on 2016 year our enterprise gained advantages over competitors and took the 4th place of honour in the Ranking of Social & Economic Project «National Elite» as per primary classification code for economic activities OKVED (All-Russian Classifier of Types of Economic Activities) «29.12.2», «Production of the pumps for handling liquids and conveyers for lifting fluids».

JSC "HMS Livgidromash" was awarded national certificates with presentation of a big medal «Bussiness Elite of RF», «The Leader of Economy, 2015» for achieving the leading positions in the industry and contributing to the development of economy in the Russian Federation, and the award certificate «The Socially Responsible Enterprise of Russian Federation» for strong labour achievements and social responsibility of the enterprise, management team and members of the labour collective; the Certificate «For spotless reputation and professionalism» was presented to the Managing Director Dvoryadkin Anatoliy Fedorovich for complete professionalism in management job in the company, that is the Top Performer of Russian Economy, and for personal contribution to achieving company excellence in industry and developing the economy of the Federated State and Russian Federation in its entirety.

The prize-winning place in the Project Ranking “National Elite” – is recognition of a contribution of the JSC "HMS Livgidromash" in economy advancement within Orel region, Federal District and Russia as a whole, in common with skillful and effective plant management, selfless work and active participation in social projects to the benefit of citizens of the Russian Federation.

The leadership position in the official ranking - is an evidence of high standard of professionalism demonstrated by the company management and staff members.