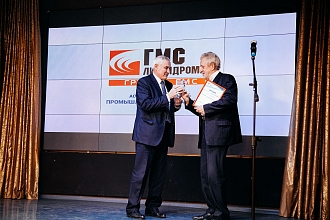 JSC HMS Livgidromash was declared as the winner in the nominated category «Industrial company of the Year» following the results of the first independent regional award for business achievements «Orlovskiy BUSINESS». The Ceremony of awarding the prize winners took place on the 2nd of December in the «Ceremonial Restaurant».

In the nomination «Industrial company of the Year» the prize was handed over by the honorary guest, the member of the Awards advisory council, the President of the Oryol Industrial Business & Trade Association - Svyatoslav Komarov.

JSC HMS Livgidromash is one of the leading enterprises -producers of the pump equipment within Russia and CIS countries. The enterprise was founded in 1947, as from 2003 it has been a member of machine-building holding JSC HMS Group.

The top management of the JSC HMS Livgidromash pays considerable attention to the programs devoted to modernization of production capacities. Annually the new modern equipment items including computer numerically controlled machines are put into operation; the effective industrial technologies are successfully mastered. At all production stages the quality control is ensured on a constant basis.

JSC HMS Livgidromash – is a perfect example of innovative production. Starting in 1959 the innovative activities were firstly implemented at the enterprise with the creation of special design office for pump development (SKBN) which some time later was converted into Livensky office branch of All-Union Research & Development Institute of hydromechanical engineering (VNIIGidromash), and more recently – in the Research & Design Center (R & D Center, HMS Livgidromash). Nowadays the active scientific and project work is still carried out. Thanks to effective tandem of production and science the enterprise achieved significantly important results: the wide assortment of the pump equipment was developed, the strong team of highly skilled production and research specialists was formed, the advanced experimental and research facilities were created, the significant contribution into the development of a national science was made. All the above developments made it possible for the enterprise to occupy one of the leading positions at the pump-building market and to secure deliveries of reliable and high-tech pump equipment.