JSC HMS Livgidromash commemorated the 70th anniversary of the company 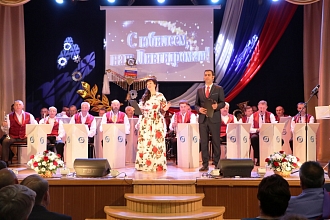 The entire team of Livgidromash celebrated the 70 th jubilee of the enterprise.

A great number of arrangements associated with the celebratory event which took place on the 24th of May were preliminarily grandly hosted. In April-May there were arranged traditional meetings of labour collectives, reunions with retired workers, different contests and quiz programs.

This very day the congratulations on anniversary were offered to the enterprise by senior leaders who came with this express purpose: А.V. Molchanov – the General Director of HMS Group, N. N. Yamburenko – the Chairman of the Board of HMS Group Management and the honorary citizen of Livny town,  А. Y. Budarin  – the First Deputy of Governor and the Deputy Chairman of the Government of Orel region, L.S. Muzalevskiy – the Chairperson of Orel Regional Council of Peopleꞌs Deputies, А. V. Belogurov – the Federal Inspector across Orel region of the Administrative Office of Plenipotentiary of the RF President in the Central Federal District, I.V.Kozin – the Deputy Chairman of the Government by Orel region, V.N. Yamburenko – the Deputy General Director of HMS Group – Senior Leader of Industrial Pumps Division, А.P. Оrlov – the Deputy General Director of HMS Group on government relations, I.B. Tverdokhleb – the President of Russian Association of Pump Manufacturers, N.G. Merkulov – the Chairperson of Federation of Trade Unions by Orel oblast, S.A. Trubitsin – the First Deputy of the Head of Administration through the Livny town, Е.N. Konishcheva – the Chairperson of the Livenskiy local Council of Peopleꞌs Deputies, Y. N. Revin – the Head of Administration through the Livny region, people in Government by Orel region, the representatives of Orel Regional Council of Peopleꞌs Deputies,  the senior officials of the HMS Group, the executive officers and representatives of the pump-building and electrical engineering industries, the executives of the enterprises and organizations of Livny town, the senior managers of financial and banking industry, the pumps sale dealers.

Everyone interested could have a look at exhibition of the best industrial prototypes of the pump products and related equipment produced at the JSC HMS Livgidromash, which was placed at the entrance of our enterprise.

Then the representatives of labour collectives of our enterprise and the guests invited came together in the hospitable ceremonial hall of the cultural-and-sporting factory clubhouse.

Many good traditions are kept and developed at the enterprise. The best one is the honouring of veterans of labour.  The title of honour ”The Veteran Worker” just on the day of factory jubilee celebration was awarded to 23 workers of the enterprise who already worked 25 years. As usually, the veteran workers were presented with certificates of appreciation, memorable gifts, money rewards and flowers.

Furthermore the awarding ceremony was attended by the representatives of top management of the HMS Group Managing Company and welcome guests. During the solemn rewarding they handed out awards to the staff members and pointed out that the achievements of the enterprise are inseparably associated with the devoted labour of the whole factory personnel.

More than fifty Livgidromash workers were dignified with awards of federal, regional and municipal levels for their years of dedicated work and high labour results.

The head of the special department of the Rubin Engineering Office of Marine Facilities Mr. S.A. Kikot, further congratulated upon celebratory event and presented as a gift the submarine model, which project is of particular significance for the Orel region as applied to the project 949А Antey- К266 Orel. The common corporate-level award of Sevmash company and Rubin Design Office (Saint-Petersburg) was also bestowed. The medals for manufacture of nuclear power guided missile submarines of strategic mission, as applied to the Project 955, were presented to the team members who made a strong contribution to the design, manufacture, trial run and keeping the NPS (Nuclear-Powered Submarine) in a high state of readiness:namely, A.F.Dvoryadkin, the Company Managing Director, М.F. Dvoryadkin, the Deputy Managing Director – Technical Director, Y.М. Mishin, the Deputy Managing Director – Head of Research-and-Development Center, V.А. Yakhontov, the Chief of Department №4, I.V. Kuznnetsov, the Chief of Scientific & Test Acoustics Laboratory №16.

Later in the day the leading singers and dancing groups of cultural-and-sporting clubhouse of the JSC HMS Livgidromash and solo performers of the town played in public.