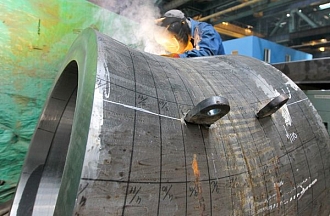 Belarussian Nuclear Power Plant located in Grodno area of Belarus will be fitted with technical equipment manufactured by Russian enterprises: «HMS Livgidromash» and «Petrozavodskmash», as reported by press-services of the said companies.

The JSC «AEM-technology» — is one of the leading Russian engineering companies within power engineering industry and is joined to JSC «Atomenergomash» - the machine-building Plant Asset Management Division of the State Atomic Energy Corporation «Rosatom». The affiliated branches of JSC «AEM-tecnology», namely «Petrozavodskmash» in Petrozavodsk and «Atommash» in Volgodonsk are directly involved in reequipment of Belarus NPP. So that the Volgodonsk branch of the JSC «АEМ-technology» has completed the key stage on welding of the locking circular seam, which connects two halves of the reactor having a gross total weight of 320 tons and designed for the first block of Belarussian Nuclear Power Plant.

The general director of JSC «Atomenergomash» Mr. Andrew Nikepelov has stated: «One may talk of one more important stage in production of the reactor for the Belarus NPP which has been successfully passed. All test results have shown absolute quality of the welded seam. Now it is extremely important to keep the gained production rate: thus ensuring completion of the remaining works in proper time and planned shipment of equipment to the Customer».

The affiliated branch office of the JSC «AEM-technology» «Petrozavodskmash» sited in the town of Petrozavodsk has started production of 16 collectors' housings for the heat carrier predestinated for the Belarus NPP – including 8 items meant for each of two power-generating units of the NPP. «During work process the blank forging is subjected to mechanical treatment, overlaying of the inner surface with double-layer anticorrosive welding, automatic welding of the subassemlies, thermal treatment and final machining processing. Every production stage gets under strict control, namely, visual examination and dimension inspection, dye penetrant flaw detection, ultrasonic examination and X-radiography. Next toproduction work done the first batch of the collectors' housings will be shipped to Volgodonsky affiliated branch office of the JSC «AEM-technology» to complete the steam generators. The schedule order will be fully executed before the end of the year», — the specialists of the enterprise have explained.

They have also noticed that the housing of the collector – is just a component part of the steam generator to be classified as the equipment of the first safety class. It has the form of heavy-walled cylinder of variable diameters and thickness, with a height more than 5 metres, and having a maximum diameter of more than one meter at wall thickness of 171 mm. This is the place where the heat transfer between the first and second contours of the reactor heat carrier is effected and the heat is taken away from the active zone of the reactor plant.

The housings manufactured by the Petroszavodsky enterprise are to be forwarded to Volgodonsk affiliate enterprise where the final assembly of the steam generators will be completed. Before the year is out the equipment can be delivered to the Ostrovetskaya project site in Grodno area where the factory works on the site development are carried out.

Then the Russian enterprise «HMS Livgidromash», which is specialized in production of pumps and related equipment for the industrial plants (it is affiliated into the machine-building and engineering holding company JSC «HMS Group») will supply centrifugal and peripheral pumping units for the Belarussian NPP. In the past the said company delivered pumping equipment for other nuclear plants — Baltiyskaya NPP, Novovoronezhskaya NPP, Leningradskaya NPP, Rostovskaya NPP, Kalininsky NPP and Tianwan NPP (P. R. China). Besides, the «HMS Group» produces equipment for oil-and-gas production enterprises, including assets held in Belarus and Ukraine.

As one of the first positive examples of import substitution economic policy there shall be given an experience of HMS Group - one of the leading machine-building holding company of the country, which just before the introduction of sanctions, precisely in 2013, began to build new unique production complex at the JSC «HMS Livgidromash» in Orel region. Thanks to strategic well-timed decision the company will localize the multiproduct manufacture of its plant assets from abroad to the Orel region by the end of the current year: namely, product manufacturing from the Ukrainian enterprise «Nasosenergomash» which traditionally meets demands of the «Transneft» for pumping equipment more than for 80%, and the specialized production from Apollo Goessnitz GmbH— one of the top world suppliers of processing pumps. At the same time the production facilities of the Ukrainian JSC «Nasosenergomash» will be fully engaged with purchase orders for pumps destined to Nuclear Power Plants in China and international oil-and-gas companies in Iraq, and the production capacity of Apollo will be guaranteed with orders for pumping equipment intended for oil-and-gas production platforms, petroleum refineries and thermal power stations in Europe and South-East Asia - according to the company official.

Let's remind the date of 27th of July when Mr. Alexandr Lukashenko was accepting the report on professional training of the staff for Belarussian NPP and on provision of housing to be taken just from state housing resources and dedicated for the plant workers and builders, he declared: «The World-best Nuclear Power Plant is under construction, and Russia together with Belarus, by giving an example of this specific Plant, wish to indicate what nuclear plants should be in the future». As he said, the first power-generating unit of the Belarus NPP should be handed over in 2018, the second one - in 2020, as it is provided by general contract for construction.

It should be observed that the decree N499 signed by Mr. Alexandr Lukashenko on November, 2, 2013 « About construction of Belarus Nuclear Power Plant» contains the same terms but the representatives of Belarus government, especially –Vladimir Semashko, has spoke out about possibility of acceleration in the rates of progress of the construction work and its prior commissioning.

As reported by REGNUM News Agency, the Russian Party under the Contract for Belarus NPP undertakes to build-up two power-generating units of Nuclear Power Plant having a total production capacity of 2400 (2×1200) МW along with the reactor plant В-491. The construction Project «NPP-2006» was worked out by the JSC «Saint-Pertersburg Research & Development AtomEnergoProekt Institute», the general designer and the prime building contractor of the plant construction is the home company JSC «NIAEP» — ZAO «ASE United Company» («Rosatom» subdivision). The «Belorussian Nuclear Power Plant» (formerly called the GU «NPP Construction Works Management») acts as the head Customer. Construction Financing for Belarus NPP Building Project is arranged against credit granting established by RF government. The earth works and alternative activities are supervised by Belorussian subcontractors. «The first concrete» at the plant construction site was poured in November, 2013.